The Independent National Electoral Commission (Inec) has begun the auditing of the accounts of 56 registered political parties in Nigeria, BusinessWorld Intelligence can now reveal. The audit covers the operations and activities of the parties for the year 2011.
BusinessWorld Intelligence can also disclose that already, letters to this effect signed by Alhaji Abdullahi Kaugana, Inec secretary were last week issued to selected external auditors by Mrs. Regina Omo-Agege, Inec's director of Political Party Monitoring and Liaison in her office. In the letters, the external auditors were asked to verify the income and expenditure profile of the political parties for the year 2011 and other activities of the parties and submit the report to the electoral body within three months. Each party is to be audited by a separate external auditor.
Auditing the accounts of political parties is part of the statutory functions of the Inec. Recently, the electoral body released 2010 external auditors' report of political parties. The report which include the financial year statements of the 63 registered political parties, membership registration as well as other details are in sharp contrast to what the parties claim to represent.
Seven of the parties namely; Accord Party, Action Alliance, Democratic Front for Peoples Federation, Hope Democratic Party, Justice Party, Peoples Mandate Party, and Peoples Salvation Party, according to the report, could not submit their reports to the electoral body for audit. And out of 56 that submitted reports, only three were found to have prepared and audited financial statements, while the remaining 53 did not have reports.

Also out of the 63 parties, only four were found to have maintained comprehensive membership register during the year under review. Major parties such as the All Nigeria Peoples Party (ANPP), Congress for Progressive Change (CPC), Labour Party (LP), All Progressive Grand Alliance (APGA), and Action Congress of Nigeria (ACN) were also accused of not having audited reports and comprehensive membership registers.

In the same vein, external auditors' reports on the accounts of political parties for 2007, 2008 and 2009 released by Inec last year indicate that only 14 of the 54 political parties recognized by INEC at the time had adequate financial records.
Some parties, including the People's Democratic Party, were alleged to have consistently flouted the Electoral Act. Other major parties; the Action Congress of Nigeria (ACN), the Labour Party (LP), the Progressive Peoples Alliance (PPA) all had questionable records. According to the report, out of the major political parties, only the All Nigeria People's Party (ANPP) had its financial papers in order.
Nigeria's largest party, PDP, which also has majority representation at the local, state, and federal government levels, could not account for the finances it received in 2008; neither did it conduct any internal audits that year. “The party does not maintain a Donation Register which is contrary to Section 95(2a) of the Electoral Act 2000,” Inec's external auditors reported. For the AC, now Action Congress of Nigeria (ACN), although the party kept its internal audited accounts for the year, it claimed that it spent almost N10 million naira above its income for the year.
After examining the books of the All Progressives Grand Alliance (APGA), the auditors called for an investigation of the party for failing to disclose the cash it received from Inec as grants. “The non-disclosure of the N6 million grant from the electoral body by the party should be investigated,” the auditors said. “The party claimed there was no income during the period under review despite the fact that the Inec released the sum of N6 million to the party during the year under review as grant,”

For the Republican Party of Nigeria (RPN), which claimed it had an income of N21.6 million, the auditors said, “Fraud is imminent. Falsification of records is inevitable. It is not possible to ascertain the accuracy of financial position of the party; hence the account cannot be relied upon.” The United Nigeria People's Party (UNPP) reported that it had an income of N6.6 million but claimed that it had expended a double of that sum.
Analysts say the National Assembly like Inec has a role to play in ensuring accountability in political parties. Both the Nigerian Constitution and the Electoral Act, confer an oversight responsibility on Inec and the National Assembly “to monitor the organization and operation of the Political Parties, including their finances”.

Specifically, Inec is mandated to arrange for 'the annual examination and audit of the funds and accounts of political parties', according to Section 15(d) of the Constitution. Section 226(1) of the Constitution makes it mandatory for the National Assembly to obtain the annual account of all political parties. But analysts believe the National Assembly ought to take the blame if the audit reports were not acted upon and if the erring parties were not sanctioned.

Indications have emerged that there may be a clean sweep of the directorate of Airworthiness of the Nigerian Civil Aviation Authority (NCAA) sequel to the June 3 air accident involving Dana Air. The directorate which has been bugged by a spate of corruption charges leading to series of terminations is this time again fingered as the major culprit in the event that caused the lives of 153 Nigerians last week.
Sources close to the authority who spoke to BusinessWorld on condition of anonymity, said the problem of NCAA has been that of corruption among the engineers. By industry standard, it is the NCAA engineers who make up the directorate of Airworthiness that certify any aircraft fit to fly, while the Air Traffic Controllers (ATCs) clear the aircraft to take off or land.
Mr. Lateef Lawal, an industry stakeholder explained that it is the duty of NCAA to ensure that an aircraft brought in is in good condition. Thereafter the surveyors from the Airworthiness Department go around unannounced to ensure that the aircraft remains in good condition. He added that the pilots ensure constant log-in of any snag on the aircraft whether in flight or on ground and it is this log-in that the NCAA engineers look at to know if there is any snag to rectify.
Commenting on the Dana Air crash, Capt. Dele Ore noted that it is the duty of the Directorate of Airworthiness to certify any aircraft that operates in the country. Another source close to NCAA, also speaking on condition of anonymity said there is the likelihood of an entire reshuffling of the Airworthiness Department, noting that Dr. Harold Demuren, director general of NCAA has done a good job that needs not be tarnished, but that the bane of NCAA has been that of corruption among the engineers, which in the past had led to a sack exercise in the agency. According to him, if actually the ill-fated aircraft had been problematic, even from the time of manufacturing then the blame should go to the Airworthiness Department, because it is the engineers from the department that certified the aircraft.
Also reacting, Mr. Simon Tumba, an aviation commentator, said that if it is true that Dana Air was deliberately cutting corners to save maintenance costs and risk the lives of its passengers as reported, then NCAA's record over the last few years has been tarnished.
“It appears the law of diminishing returns has set in. It was time the government undertook a minor reorganization of that place to meet strict safety standard and procedure. We are hearing stories that pilots do not log faults in their books, but rather give notes to their engineers so that inspectors cannot trace aircraft faults. NCAA needs new thinking and approach,” he said.
Meanwhile, preliminary investigations and transcription from the cockpit voice recorder of the crashed plane indicated that the aircraft suffered engines failure prior to the accident. Competent sources close to Ministry of Aviation indicated that before the fatal accident the pilot in Command had complained of engine failure to the Control Tower in Lagos and eventually declared emergency.
It was also learnt that the two Control Columns in the cockpit failed to respond to pilot's command which led to the malfunction of the engines.

Posted by Businessworld Newspaper at 03:47 No comments:
Email ThisBlogThis!Share to TwitterShare to FacebookShare to Pinterest 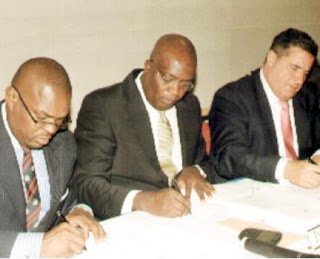 By Chris Uba
Read more »
Posted by Businessworld Newspaper at 09:18 No comments:
Email ThisBlogThis!Share to TwitterShare to FacebookShare to Pinterest 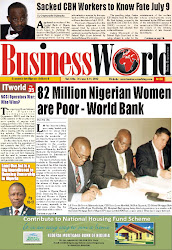